Electroplating of surfaces made of rhodium, gold, silver, nickel, chrome, copper and tin using rack or barrel plating to improve the properties and appearance of your metallic workpieces.

Electroplating of series, small series as well as of extraordinary single pieces

Different products of our customers require different galvanic processes for surface refinement. During electroplating, the properties as corrosion and wear protection as well as the desired functionality are improved by better electrical conductivity in electrical engineering. We master the wide range of galvanic metal finishing processes for the production of functional and decorative surfaces for all metals suitable for electroplating.

Take advantage of our many years of know-how in drum electroplating. With drum electroplating, we are in a position to coat so-called galvanic mass-produced goods cost-effectively. Contacts and connectors or other small parts can be realized with our automatically controlled treatment line according to customer requirements.
learn more about Drum galvanic

During rack plating, your workpieces are fixed on a rack for the coating process and then electrolytically refined in the galvanic process. With this galvanic coating process we are able to process series and small series electroplating as well as unusual individual pieces.
learn more about Galvanic frames

As a service provider, our company specialises in decorative and functional electroplating processes.

Electroplating serves to improve the surface properties of a workpiece. During electroplating, the positively charged electrolytes are used to apply an electrochemical electroplating of metal to metallic workpieces for surface coating or surface refinement.

Decorative electroplating is mainly used to embellish objects. Among other things we can offer surface refinement as chrome plating as well as gilding and silver plating of jewellery up to cutlery.

Functional electroplating is mainly used for corrosion protection and wear protection. Furthermore, the electrical conductivity can be increased by the surface coating of contacts with the aid of galvanic silver plating and gold plating.
Here you can send us your inquiry (inquiry form)

Rhodium is one of the platinum metals. This very valuable metal is distinguished by its extremely hard surface during electroplating and is chemically very resistant. It often acts as a tarnish protection for silverware.
learn more now 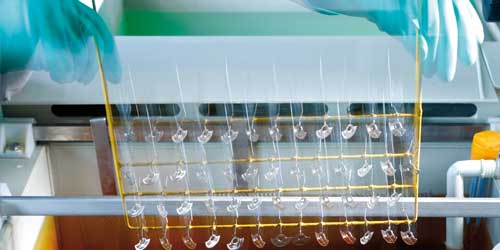 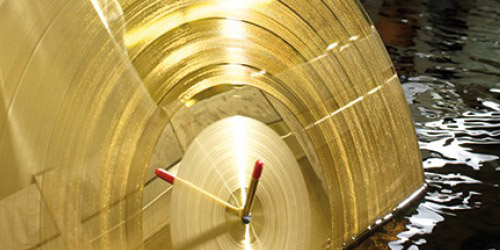 Like hardly any other metal, electroplated gold plating has a very broad and varied range of applications. Gold has very good electrical conductivity, is virtually corrosion-free and is therefore used in technical applications.
learn more now

The good physical and mechanical properties of nickel electroplating are characterised by its hardness, wear resistance and tensile strength. The nickel coating has a silver-like colour with a matt to shiny good appearance and is also in demand for its corrosion resistance.
learn more now 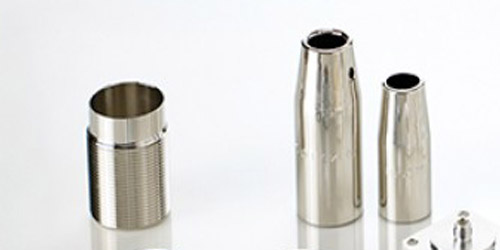 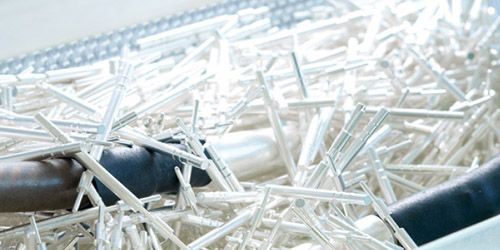 We offer various processes of galvanic bright silver plating as well as soft and hard silver plating. Silver has good formability and ductility and very good electrical and thermal conductivity. In addition, we are specialists in the silver plating of contacts and connectors.
learn more now

Chrome electroplating is used in the decorative and technical fields. For example, matt to glossy coatings with good corrosion protection properties can be produced. Galvanic chrome coatings have a shiny silver colour, high hardness and wear resistance and retain their shiny appearance.
learn more now 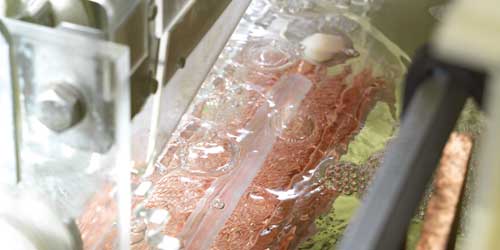 With its reddish colour, copper electroplating is interesting for decorative applications and is easy to polish. In the technical field, copper is used as an intermediate layer before silver plating or nickel plating of copper and copper alloys.
learn more now

Tin electroplating provides good chemical resistance and solderability. In the functional area, for example, tin plating of electrical contacts is used for the electronics industry.
learn more about Tin galvanic 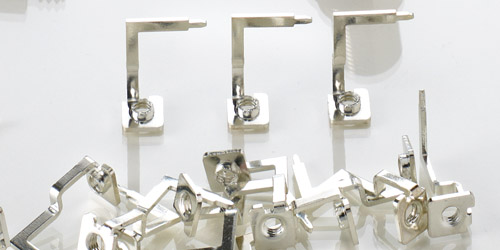 The term electroplating or galvanotechnics is used to describe the processes that produce metallic deposits on a self-conducting material by means of electrochemical processes. Nowadays, they are mostly used to coat surfaces.

Galvanoplasty, which was once used to create statues and monuments, is hardly used today. The technique of electroplating was made possible by the invention of batteries by Alessandro Volta, this was around the year 1800. He invented this battery in connection with the research of Luigi Galvani, who is also the eponym for today's galvanization.

During his experiments, Volta discovered, among other things, that copper precipitated on an iron rod that was connected to the negative pole of his battery and immersed in a copper sulphate bath. For this purpose he immersed a copper rod, which was connected to the positive pole, in the solution as well. This simple procedure is still used today by hobbyists to enhance workpieces with copper luster.

Later, the first documented gilding was carried out in 1805 by a student of Volta, and from 1840 the process was increasingly used industrially. From about 1850 onwards, life-size statues were produced comparatively cheaply using the process, and the triumphant advance of electroplating had begun.

Over the centuries, electroplating has developed into a mature process with numerous possible applications. In addition to plastic electroplating and the application of metallic coatings, a distinction is made between decorative and functional applications. The enhancement of surfaces is characteristic of one use of the technique. Fashionable jewellery, for example, is often gold-plated, silver-plated or coated with other metals. Typical examples of objects enhanced by electroplating are chrome-plated components in motor vehicles, silver-plated cutlery or shiny metallic plastic parts.

However, electroplating is much more important in the field of functional applications. Because the thickness of the layer can be controlled very well and is also uniform when carried out professionally, workpieces can be coated in a variety of ways. Technically, it is also possible to make plastic components electrically conductive, which expands the application area of electroplating immensely. For example, screws are galvanized for corrosion protection, machine parts are hard-chrome plated for longer durability, and electrical contacts are gold-plated, silver-plated or copper-plated for better conductivity. In the field of functional galvanoplastics, mould construction for injection moulding machines and the lithographic-galvanic impression technique, which was not invented until around 1980, can be found.

Currently, in Germany alone, the approximately 2100 registered companies in the industry have an annual turnover of 8.3 billion euros and employ around 60,000 people. Training to become an electroplater, which today is more simply called a surface coater, takes three years in Germany and four years in Switzerland. Further training to become a technician is possible, and if you have a university entrance qualification, you can also study or train as a master craftsman.
Certificates
We are certified according to DIN EN ISO 9001 and DIN EN ISO 14001.
Contact
+49 (0)351 28904-0
+49 (0)351 28904-50
Dresdner Silber und Metallveredlung GmbH
Sosaer Straße 39 01257 Dresden Germany
Inquiry form
Dresdner Silber und Metallveredlung GmbH
Sosaer Straße 39 01257 Dresden Germany
+49 (0)351 28904-0
+49 (0)351 28904-50